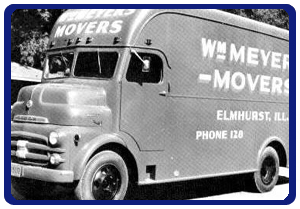 1957 – Lois & Bill Miller take over ownership from William and the second generation of Meyers Movers is under way.

1974 – Kenneth Miller, the son of Bill and Lois, makes the choice after graduating from Northern Illinois University to work in the family business. Together with his wife Linda, they become third generation owners of Meyers Movers.

1984 – Meyers Movers joins Arpin Van Lines and quickly becomes a top agent in the country. Also, in 1984, Ken Miller is elected to the Illinois Movers and Warehousemen’s Association serving as President from 1991-1993. Ken continues to this day to be on the Board of Directors.

1987 – The company leaves the family home in Elmhurst, which had been its headquarters since 1926, and moves to a 30,000 square foot office and storage facility in Itasca, IL.

Wm Meyers Movers proudly handles all the equipment moving needs for the Chicago Bears and other visiting NFL teams, and over the years has done a tremendous amount of work for players, coaching staff, Bears employees and members of the Chicago Bears family and network of friends.

2000 – Amy Miller, the daughter of Linda and Ken graduates from Johnson & Wales University and becomes the 4th generation to work for the family business. Amy works every role in the company from household goods packer to warehouse operations and was promoted to General Manager in 2021. Amy hopes to take ownership of Wm. Meyers Movers in the future.

2020 –Wm. Meyers Movers becomes an agent for Wheaton World Wide Moving where we have earned Agent of the Month in October 2020 and November 2021.

In Your Community and Around the World

Today, Meyers successfully serves Northeastern Illinois and the local community’s residential and commercial relocation needs. We are a family owned and operated business with strong local community ties and the Proud Moving and Storage Provider for the Chicago Bears. Over the years we have moved thousands of your neighbors, and now the majority of our work comes from returning customers and customer referrals.

As a local area agent for Wheaton World Wide, , Meyers Movers is a community –based service provider with far reaching and vast resources from one of the nation’s premier nationwide and global moving service providers.